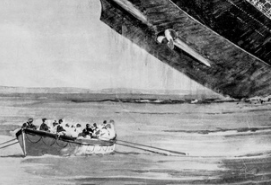 With thanks to ” The Conversation” for this article about WW1 American writers acting independently.

“It was a very public gesture for a very private man. On July 26 1915, the novelist Henry James gave up his American nationality and became a British citizen. He placed a notice in The Times explaining why.

He had lived in England for almost 40 years, he said, and had formed many “long friendships and associations”, but it was the war raging in Europe that had cemented his “desire to throw his weight and personal allegiance, for whatever they may be worth, into the scale of the contending nation’s present and future fortune”.

To intensify public interest, James asked H H Asquith, the British prime minister, to sign as one of his personal sponsors – each of whom had to testify that this celebrated author of some 20 novels and 100 short stories was capable of “speaking and writing English decently”. Even in the dark days of 1915, that must have raised a smile.

James was quite serious, however. For him, as for many Americans, the war in Europe was much more than a local squabble about geopolitical boundaries or a struggle for influence in the colonies. He called it the “crash of civilization”. To a post-evolution generation, brought up to believe that the biological world and social structures were all programmed to progress towards perfection, this vast and brutal conflict meant the collapse of an entire world view.

It was, James wrote to a friend, as if they had all been drifting placidly along to the edge of some “grand Niagara”. He was bewildered that the US government seemed willing to sit back and observe, especially after the sinking of the Lusitania in May 1915 by a German U-boat with the loss of 124 American lives.

James was not alone in feeling that America had a role to play. Although the US government would not officially join the war until April 1917, thousands of American citizens, perhaps as many as half a million, travelled to Europe to enlist with European armies – on both sides of the fighting. In 1914 around one in four Americans was of recent German descent; many mid-western communities were German-speaking. Conversely the east-coast bourgeoisie, many of whom had travelled in France or Britain, leaned towards the Allied cause.

No wonder president Woodrow Wilson hesitated to get involved. Many such volunteers did not come back. The poet Alan Seeger died fighting with the French foreign legion, for example. But military action was not the only way of taking part, as Wall Street banks, farming collectives and munitions firms quickly discovered. By supplying the Allies with cash loans, wheat and arms, these businesses prolonged the war beyond the limits of British and French resources, and established America as the dominant world economy. This was not exactly the kind of intervention James had imagined.

Other Americans, including many writers, responded to the humanitarian demands of the war. James’s close friend Edith Wharton organised a refugee agency for Belgians in Paris. She also toured the Front for Scribner’s magazine, producing a vivid series of essays published as Fighting France in 1915. The novelist Mary Borden ran a field hospital for the French army, largely funded from her own fortune, and came to very bleak conclusions about the purpose and methods of the war – as voiced in her haunting memoir The Forbidden Zone (1929).

Meanwhile Ellen La Motte, who nursed at Borden’s hospital, wrote The Backwash of War (1916). It was the first book to set the ironic and anti-idealistic tone that so many war texts would follow. Her opening chapter, “Heroes”, contrasts the selfish and petty wounded soldiers in her ward, the supposed heroes of the battlefield, with the dignity and courage of an attempted-suicide case.

Foiled in his attempt to shoot himself by the skill of the hospital surgeons, this soldier tears off his bandages night after night, determined to take death on his own terms. Tellingly, La Motte’s book was silenced by publishing restrictions after the US declared war in 1917.

James’s own chance to do something concrete came when the archaeologist Richard Norton asked him to be honorary president of the American Volunteer Motor-Ambulance Corps, later known as the Norton-Harjes Unit. Norton recruited his drivers mostly from Ivy-League universities. Such young men were more likely to speak French, meet their own expenses, and have driving skills – or better still to own a car that could be shipped to France and converted into an ambulance.
As “gentleman volunteers” they were attached to no army and carried no weapons. Their sole brief was to transport the wounded to field hospitals such as Borden’s. James, increasingly horrified at the scale of the violence, felt this was a cause he could endorse. He wrote an open letter to the American press appealing for donations.

There was, he felt, something apt about the presence of “the university man” at the Front. These young graduates were able not just to offer practical help but also to understand “the palpable social result” of the war. In 1915 no one could have guessed how right James was. Over the course of the war, the Norton-Harjes Unit and operations like it would turn out some of the finest American writers of the post-war era, including Ernest Hemingway, E E Cummings, John Dos Passos, Archibald MacLeish, Dashiell Hammett and Malcolm Cowley. One critic later called Norton-Harjes “the most distinguished of the lost generation’s finishing schools”.

Like La Motte, these new writers had little use for the language of the past. In a newspaper interview in 1915, James had said: “The war has used up words; they have weakened, they have deteriorated like motor-car tires”. It was a shrewd judgement about the impact of the war on the literature of the future. James would not write that literature; after a series of strokes, he died in February 1916.

But those men and women who observed the war would find new words and new ways to express what they had witnessed. They would also find ways to challenge the idea of what it meant to be American. Like James, these writers knew that sometimes the best way to serve your country is to tell it when it is wrong.”