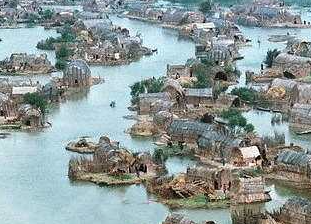 Thanks to “Iraq Update” for its wealth of scholarly resource. This piece exploring the mysteries of the  Marsh Arabs, so often persecuted by those around them, is a window into a world apart.

“The inhabitants of this region are wild and inhospitable and utterly beyond the control of the Turkish authorities, and navigation of the river between Korna and Suk-esh-Sheiukh is unsafe owing to the attacks of armed pirates.”
Encyclopædia Britannica (1911 edition)

“…the extensive marshes which cover the southern part of the Tigris-Euphrates delta also form a special district, widely different from the rest of Mesopotamia. With their myriads of shallow lakes, their narrow waterways winding through dense thickets of reeds, their fauna of water-buffalos, wild boars and wild birds, their mosquitos and their stifling heat, they constitute one of the most strange, forbidding and fascinating regions of the world. Although they may have varied in extent and configuration, anicient monuments and texts prove that they have always existed, and indeed, the Ma’dan, or marsh-Arabs, appear to have preserved to some extent the way of life of the early Sumerians established on the fringe of the swamps more than five thousand years ago.

From an archaeological point of view, the Iraqi marshes are still largely terra incognita. Reports from travellers suggest that traces of ancient settlements are exceedingly rare, probably because they consisted of reed-hut villages similar to those of today, which have completely disappeared or lie buried beneath several feet of mud and water. It is hoped, however, that modern methods – such as the use of helecopters – will eventually open to exploration a region which is by no means lacking in historical interest.”
Georges Roux, Ancient Iraq, 1964. Reprinted in 1992

“…Memories of that first visit to the Marshes have never left me…Firelight on a half-turned face, the crying of geese, duck flying in to feed, a boy’s voice singing somewhere in the dark, canoes moving in procession down a waterway, the setting sun seen crimson through the smoke of burning reedbeds, narrow waterways that wound still deeper into the Marshes…”