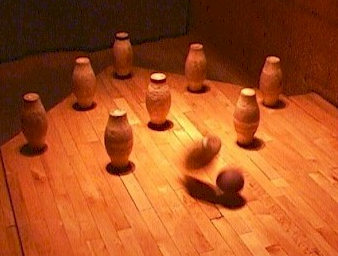 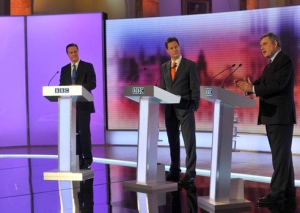 Definition of an Aunt Sally: an object of criticism or contention; especially :

one that is set up to invite criticism or be easily refuted. ( i.e. “skittled”, as in the traditional game).

The chaotic farce designed by the broadcasters around the 2015 televised leadership debates is a classic example of an Aunt Sally:

a “fact”, usually plucked from very thin air, spuriously fabricated, which can then be

An argument is premised on a fact which never existed ( in this case, that Cameron is cravenly obstructing the leadership debates on tv) in order for a counter argument to be constructed so as to score a point  (in this case that Labour will force Cameron to do what the electorate demand) which was never an issue which it was necessary to argue in the first place! Cameron never refused to debate, just insisted the debates should be properly organised. Labour’s Aunt Sally, unlike the skittle which was well-founded, is deliberately spun and set up for the sole purpose of inventing a febrile but false conflict. (Penstorm)

With thanks to BBC News online/ Politics

He told the Observer it was time “these debates belong to the people not the prime minister of the day”.

Mr Miliband is proposing that the body that currently negotiates the terms of the debates becomes a statutory trust.

It comes amid much controversy about who will appear in what debates during this year’s election campaign.

Downing Street has said David Cameron will not take part in all three of the debates in April proposed by broadcasters.

His “final offer” is for a single event, involving seven party leaders, in the last week of March.

The trust proposed by the Labour leader would be responsible for determining the dates, format and attendees of the debates. This would be giving quasi-statutory powers to the unelected media over an elected government! ( Labour consistently confuses the will of the “media” with the will of the “People”…

‘Empty chaired’
Mr Miliband told the Observer: “In recent days the British public has been treated to the unedifying and tawdry spectacle of a prime minister seeking to duck out of the TV debates he once claimed to support with great enthusiasm.

“Yesterday the broadcasters made it clear they would not be cowed by his tactics but it is wrong for them and the British public to have governing parties use this kind of pressure in campaign periods.

“It is time to ensure, once and for all, that these debates belong to the people not the prime minister of the day.”

Broadcasters have said plans for three debates in April will go ahead, meaning the prime minister could be “empty chaired”.

Downing Street blamed the broadcasters for “chaotic” negotiations, indulged in for months.

Sky, the BBC, Channel 4 and ITV have invited the leaders of the Conservatives, Labour, Lib Dems, UKIP, SNP, Green Party of England and Wales and Plaid Cymru to take part.