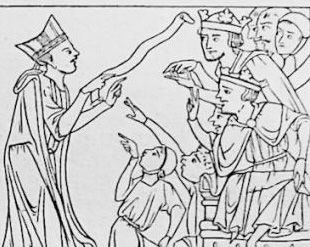 According to legend, “Will no-one rid me of this troublesome priest?” are the fateful words King Henry 11 raged in frustration at the treacheries he believed played upon him by Thomas a Becket. His Archbishop had once again refused to hand back powers the church usurped from the state.

Ecclesiastical courts had en­croached upon the jurisdiction of the lay courts during the previous chaotic reign of Stephen. Henry found that in such cases pertaining to the clergy, including its remoter lay fringes, Church verdicts overruled the law of the land, and their own sinners were punished more leniently, if at all, for their crimes.

In the Constitutions of Clarendon, the king outlined a plan to shore up the universal customs of the kingdom.

Henry addressed the abuse of the clerics’ appeals to Rome for a higher authority over the laws applied to others. He insisted the higher clergy obtain a royal licence to travel to Rome to challenge his own lay courts. He wanted accused clerics to be handed over to the secular courts for final judgment after the Church had declared its own penalties. Becket continued to fight for clergy to be exempt from secular punishment. Initially, he yielded to pressure but later obtained a papal dispensation to annul his promises on the grounds of coercion by Henry’s lay barons. For that defiance, he had to flee to France, the Pope and exile.

Henry’s tactless coronation of his son without the traditional ministrations of the archbishop of Canterbury worsened the standoff. The Pope threatened to suspend the bishops who had performed the ceremony and to lay the king’s continental territories under an interdict. Henry and Beckett were forced to a peace and the archbishop subsequently returned to Canterbury.

But Becket immediately excommunicated the bishops who had collaborated in the coronation ceremony. Four knights eagerly acted upon the words of the infuriated king upon learning of this effrontery, and rode enthusiastically to England to murder Becket in his cathedral.

In due course, Henry succeeded in reclaiming the previously established rights for the independence of the English Crown. But he failed to bring those privileges called “Benefit of Clergy” under secular law, which persisted until the Reformation, when state and church combined, at last, more coherently.

Later still, lawmaking became separated from the monarchy with the establishment of parliament and the beginnings of democracy on its bumpy journey towards universal suffrage.

The modern system has worked well in practice, but this hard-earned progress will be reversed if churches today forget their special, and distinct, role in the constitution. Clerics seem increasingly emboldened to neglect their duty of spiritual service, preferring to tinker with second-guessing the temporal decisions of elected governments. Indeed, the churches’ arrogant interference must be virtually treasonable where  their privileged pulpits, disguised as the founts of voxpop, function more as subverters of lawful stability than as channels to heaven. The only space they are charged to “Occupy” is that step at the foot of God, not at the foot of St Paul’s Cathedral. If priests feel tempted to speak for the general populace, they should stand fairly and openly for election to parliament or local councils; thereby offering their opinions on an equal footing to those citizens who are addressing, practically, material as well as moral quandaries.

“Render unto Caesar what is Caesar’s and unto God what is God’s” are the words attributed to Jesus when his enemies connived to lure him into the time-honoured traps of taxation vexation.

It is brazen cowardice for the churches to plot a political manifesto which is a rival to the ones processed through accepted democracy. If today’s clerics are primed to fan discord between an elected state government and its people, questions need to be asked; and pillars of the establishment in their ivory towers scrutinised in plain sight.